Sigh… the Halloween costume. I always have this debate with myself whenever Halloween comes around; the sketchy costume or the funny costume?

I know most won’t admit this, but I know I am not the only one that at least thinks about sporting the scanty bunny costume to the Halloween parties. Come on, you know you do! You at least try them on at the store, just to see…. The question is, why? Well, because for some odd reason our culture has made Halloween the only day when people can wear whatever they want with no judgment, and it is natural to want to fit in and grab some of that attention. But as you reach your twenty-somethings, is it still okay to choose the sexy kitten costume in instead of the giant sized banana suit? For the record, I dressed as a banana last year.

I have talked with ALOT of friends, coworkers and family members about this topic and have received a plethora of opinions. Some say the scandalous outfit is just an easy way to flaunt the goods without having any sense of responsibility and some say it’s all in good fun. It is safe to say that the lines are blurry. Here are some of the issues I gathered after talking with my fellow twenty-something peers:
a. “It is okay if you are in shape.” For the record, in my opinion our society has a very sketchy view of what it means to be in and out of shape, so this prerequisite begs some questions.
b. “It depends on the place of the party. For example, I would never wear a revealing policewoman costume to a children’s apple-bobbing party.”
c. “It depends on if there are people there that I know. Normally, the funny costume is way more fun to flaunt if you are surrounded by close friends. But, I would never be a flower pot at a bar. No guy wants to buy a drink for a flower pot.”
d. “Well, am I single or in a relationship? I see no need to be a skanky schoolgirl if I have already won the guy of my dreams.”
e. “I think that part of growing up is realizing that we have more to offer to the table than a hot body that looks good on Halloween. It depends on how you want other people to view you; the girl with the great sense of humor or the one with the great boobs…” 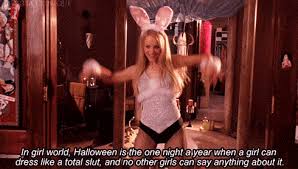 I have also gathered that there is a way to be both sexy and silly. One of my friends shared that one year she went as Sexy Chinese Food. According to her, there were no ugly looks towards the revealing costume, but instead giggles and props for the creativity. The costume showed skin, but it was tasteful (ha… the pun). However, the girl at the party that wore underwear, a bra with an anchor glued to it and claiming to be a sexy sailor received some negative feedback. This claims to create two sides of the Halloween costume; the white trash and the funny sexy. 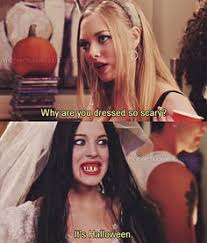 So, there seems to be a level of class that distinguishes the too-revealing costume with the just-rightly-revealed costume. So, who is to judge which costume is okay for us twenty-somethings? The answer, my friends, is you. Be yourself. If you have more fun sporting a giant flower pot costume on all hallows eve, then rock it. If you have more fun sporting the sexy kitten costume, then work it. What is important is that you have fun with what you are doing and feel comfortable in what you are wearing, too little or too much.

So, my twenty-something friends, what do you think? Sexy or Silly?